Last time we looked at the planets and what they represent. Now we’re going to look at what they do, starting with their relative strengths in the various signs. It’s probably going to take a couple or three articles.

You will probably have read, when looking at your horoscope in your favourite publication, that various planets ‘rule’ various signs. The reason for that is that Mars, for example, has very close affinity with Aries or that the Moon’s effects pretty much match those of Cancer. The whole setup is in the table (below) which is a modernised version of Ptolemy’s Table of Essential Dignities and Debilities. Yes, that Ptolemy, all the way back in the second century AD.

As well as the various rulerships, the table shows in which sign each planet is ‘Exalted’, in ‘Detriment’ or in its ‘Fall’. Now you’re going to need those terms explaining.

Now, ‘rulership’ is fairly easy. The Sun rules Leo, for example; that’s because the Sun is the ‘king’ of the Solar system and the qualities of the Sun pretty much match those of Leo. Likewise the Moon rules Cancer—watery, nurturing and so on—and on down the list.

Next thing you’ll notice about the table is that some signs appear to have two rulers and some planets rule two signs. That’s one of those occasions where the ‘old’ system (before the discovery of Uranus) has the ‘new’ planets overlaid. Originally Scorpio, Aquarius and Pisces were ruled by Mars, Saturn and Jupiter respectively. Uranus came along and was was found to be more Aquarian than Saturn (actually, pretty much anything is more Aquarian than Saturn), so it took over there; Neptune oozed in and quietly annexed Pisces; and Pluto, who just loves digging out the hidden stuff, was a dead ringer for Scorpio.

The thing is, the old rulers still have an effect in some cases. There are no hard-and-fast rules here; it’s just that sometimes a Scorpio subject has more affinity with Mars than with Pluto (or maybe would like you to think so) or there are the rare, bouncy Pisces types who are a bit more Jupiter than they are Neptune. There are always other factors in an individual chart to consider but it’s worth considering the ‘traditional’ rulerships where all else fails.

Exaltation, Detriment and Fall have somewhat fallen into disuse in modern times, at least as afar as I am aware. It’s hard enough to keep track of the original seven planets; when you add three more, at least one of which isn’t yet fully understood, it gets totally confusing. However, all I’m doing here is explaining what those terms mean.

‘Fall’ is fairly simple; it is pretty much the opposite of rulership. A planet in its Fall is seriously weakened in its effects and isn’t, basically, its usual self. Following on from that, ‘Detriment’ is a weakening of a planet, rather like running on half-power, and ‘Exaltation’ gives a planet something of a boost in its effects but not up to ‘Ruler’ level.

Just in case you’re wondering why Pluto has a couple of ‘n/k’ columns, it’s because it hasn’t yet been through a complete observed cycle. When it was discovered in 1930 it was in Gemini; currently it’s in Capricorn. No matter what anyone tells you, we only ‘know’ (read: currently finalising) what Pluto does between Gemini and Sagittarius. Capricorn is a work in progress and Aquarius to Taurus are just speculation. Given that Pluto’s cycle is around a quarter of a millennium it’s going to take a while longer to get everything straight.

That’s it for this one; next we’ll look at the planets themselves and what they represent. 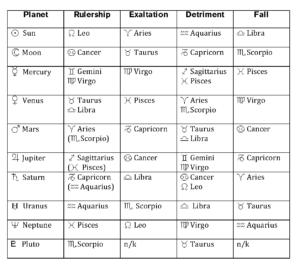 If you really want to. you can download this file.

This site uses Akismet to reduce spam. Learn how your comment data is processed.